This is mostly a comedy-inspired week (with the exception of wolf boy from last week). In case you can't tell (due to to my lack of experience when doing portraiture of real people), the comedians I've done are: Noel Fielding, Mike Birbiglia, Bret McKenzie and Jemaine Clement, Demetri Martin, Louis C.K., Jim Gaffigan, and Dave Chappelle. 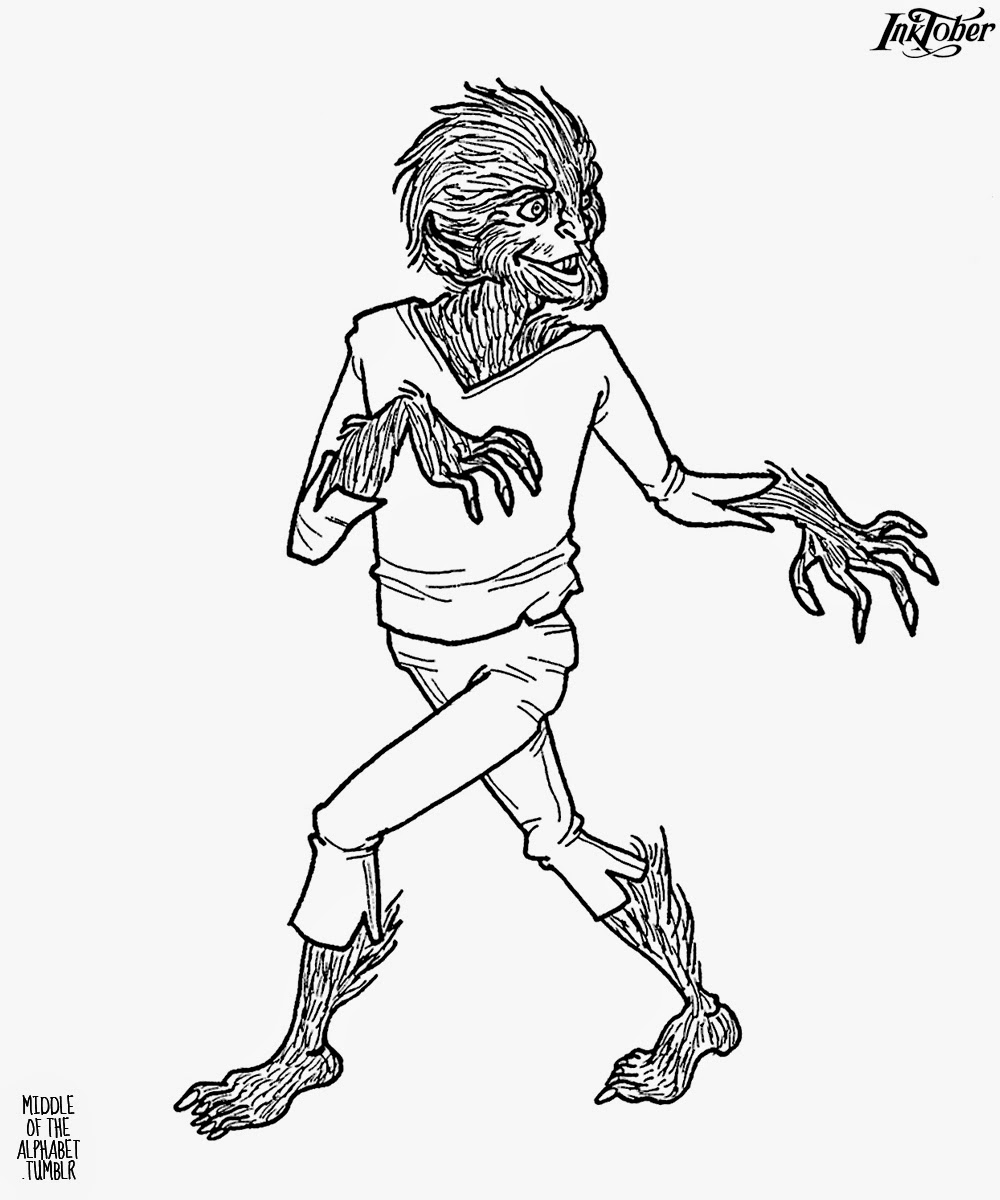 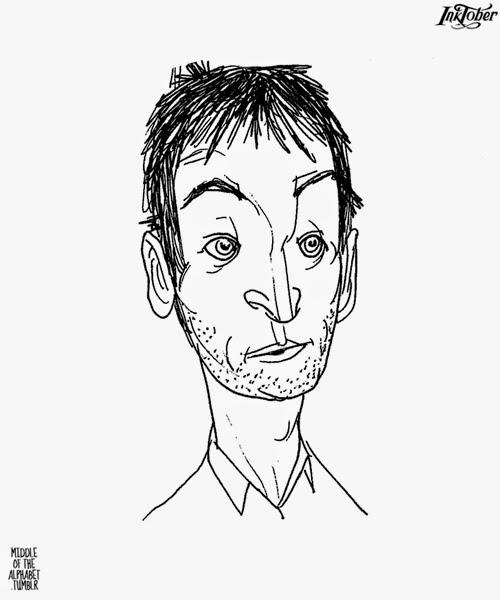 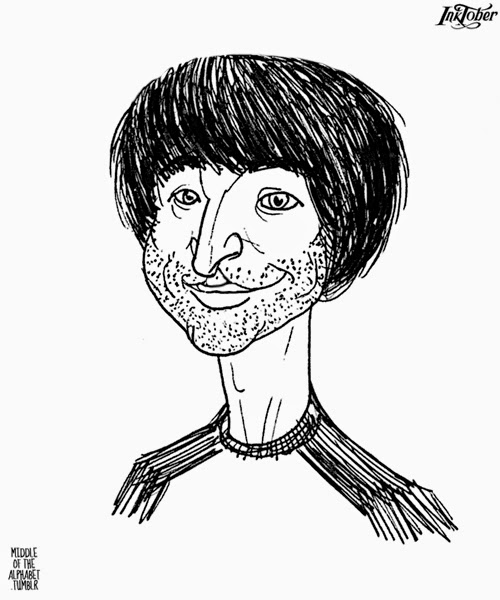 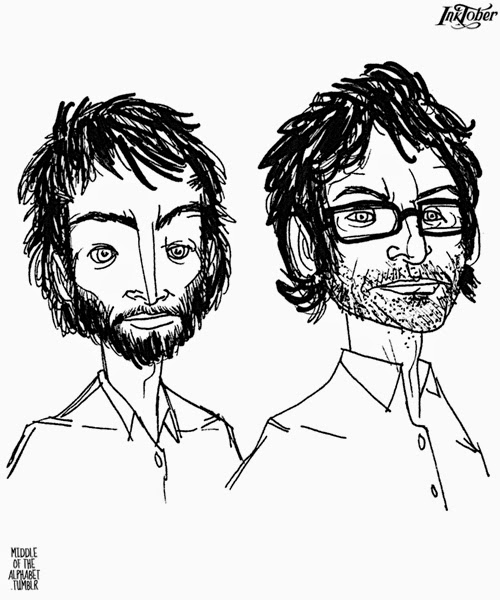 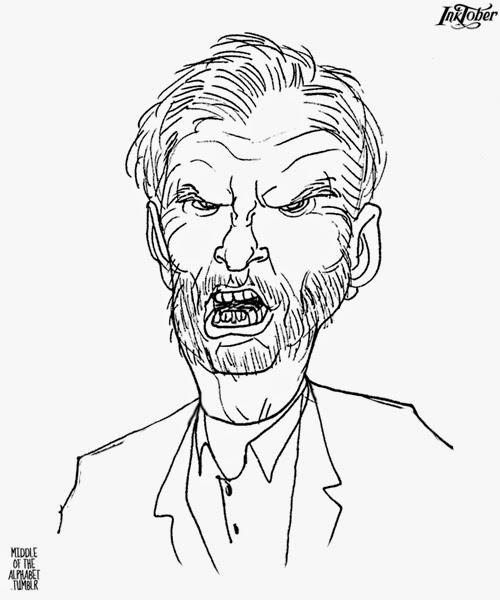 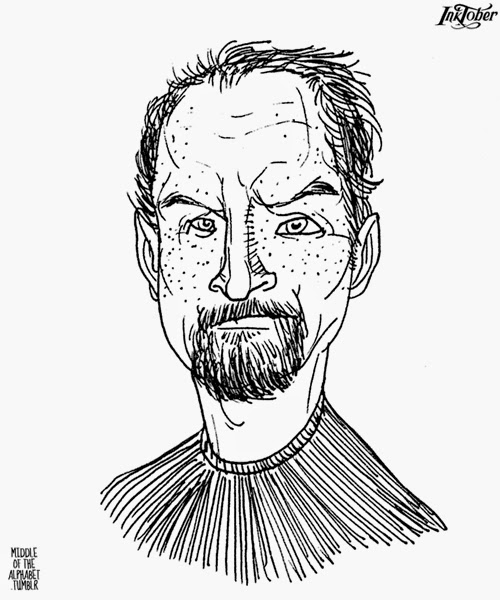 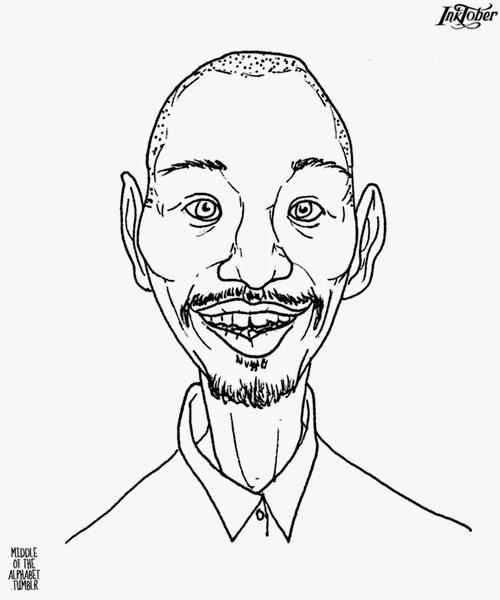 Posted by Jeremy at 3:12 PM No comments:

This year I'm finally partaking in Inktober, an initiative started by one of my longest running inspirations, Mr. Jake Parker. Inktober, in a nutshell, is a challenge based on a simple premise: do one drawing, in ink, every day during the month of October. There are literally thousands of Inktober pieces across the internet. I'll give tumblr's hashtag as a start.

Day 1: Mr Pickles and Oilcan, my two favorite characters from The Boxtrolls (which I thoroughly enjoyed) 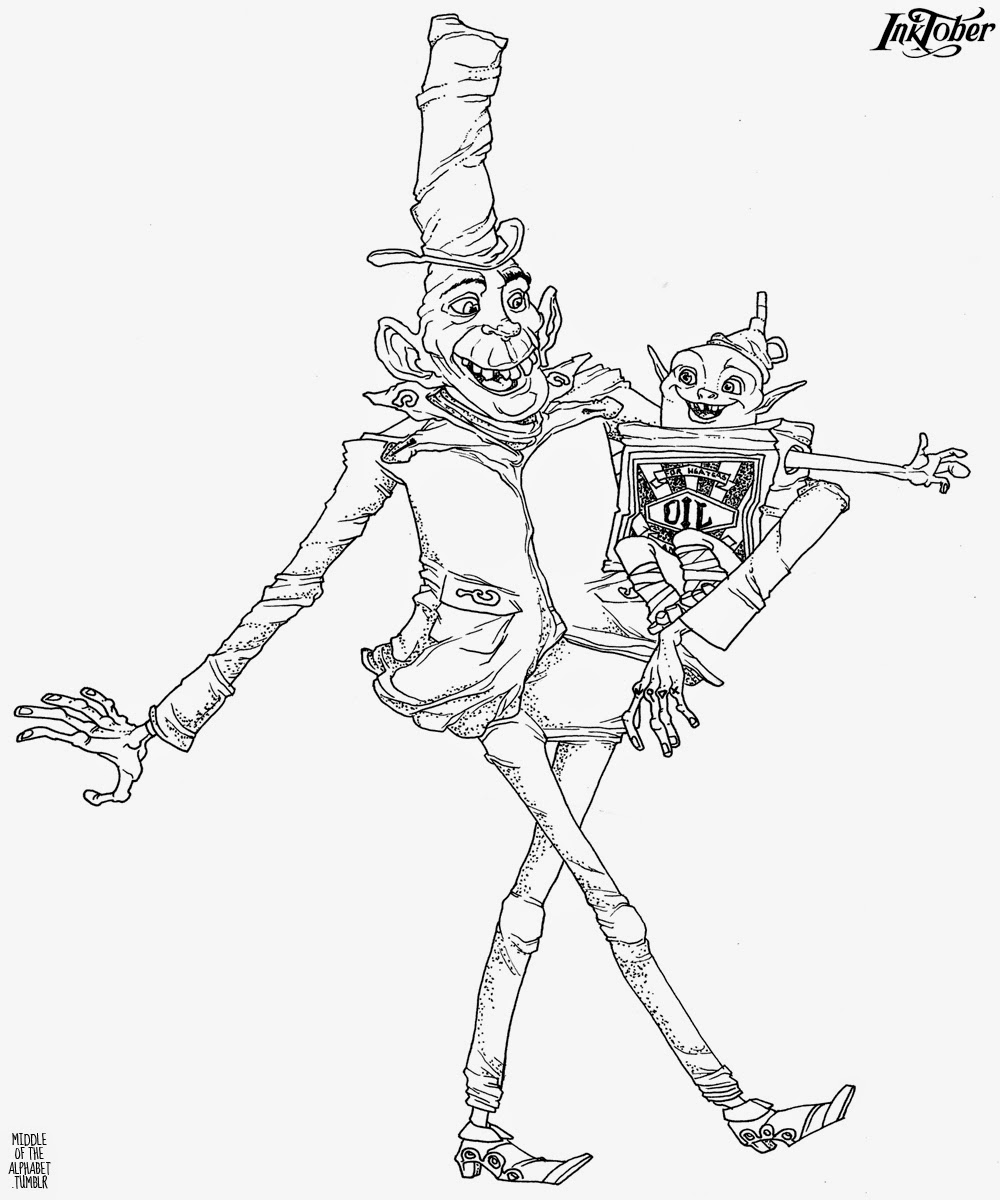 Day 2: Strongman, part of a short series inspired by AHS: Freak Show, leading to the premiere 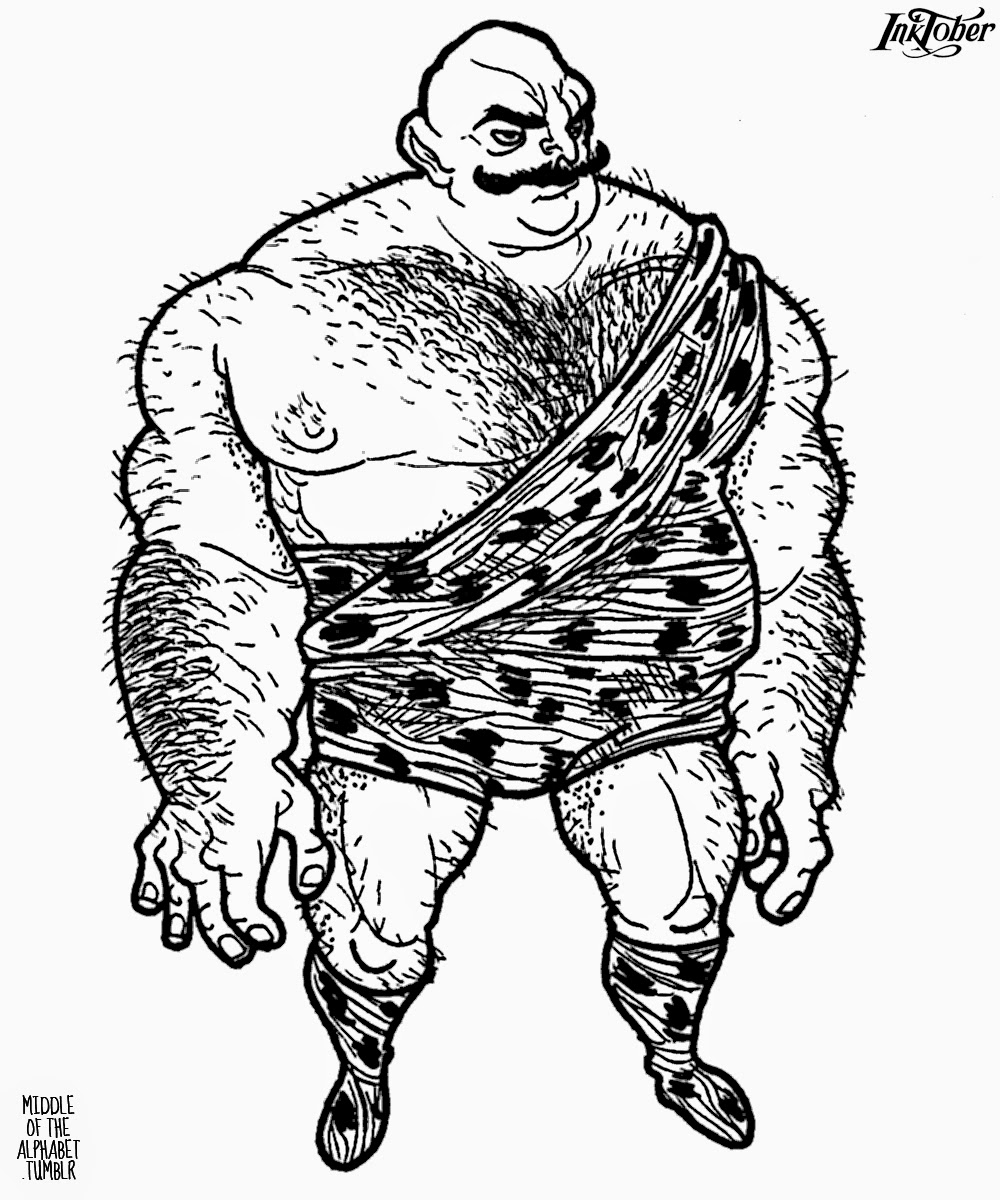 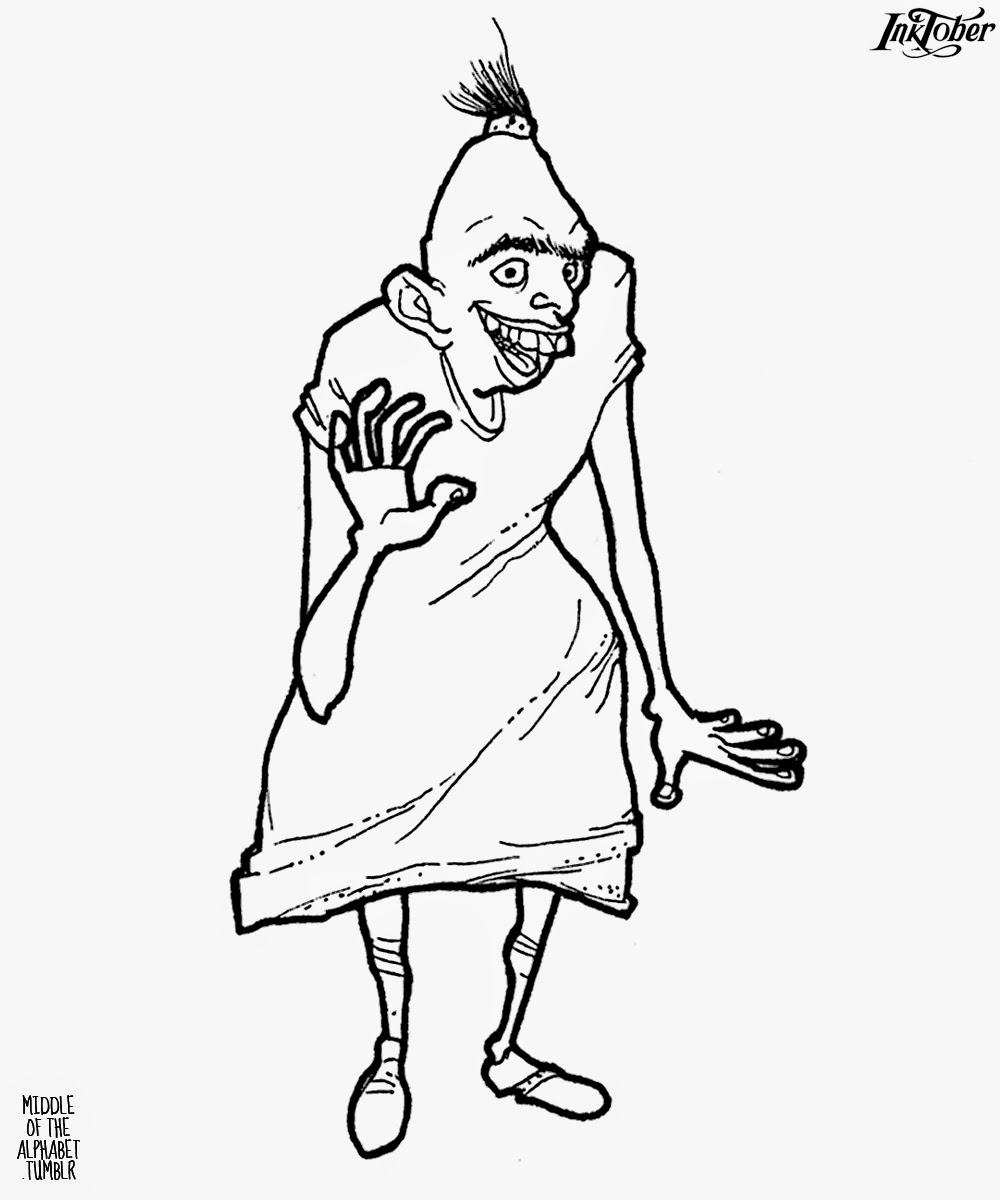 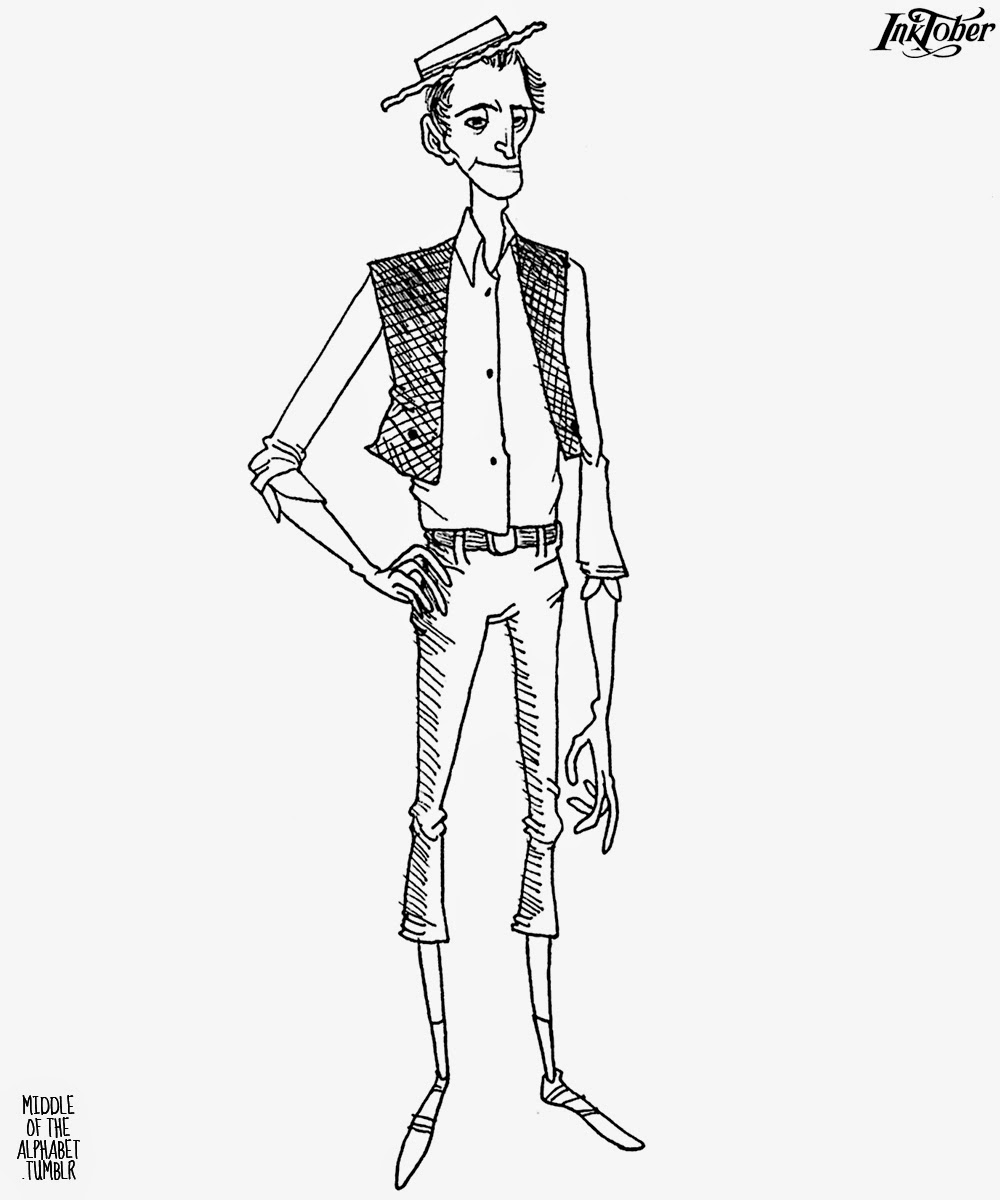 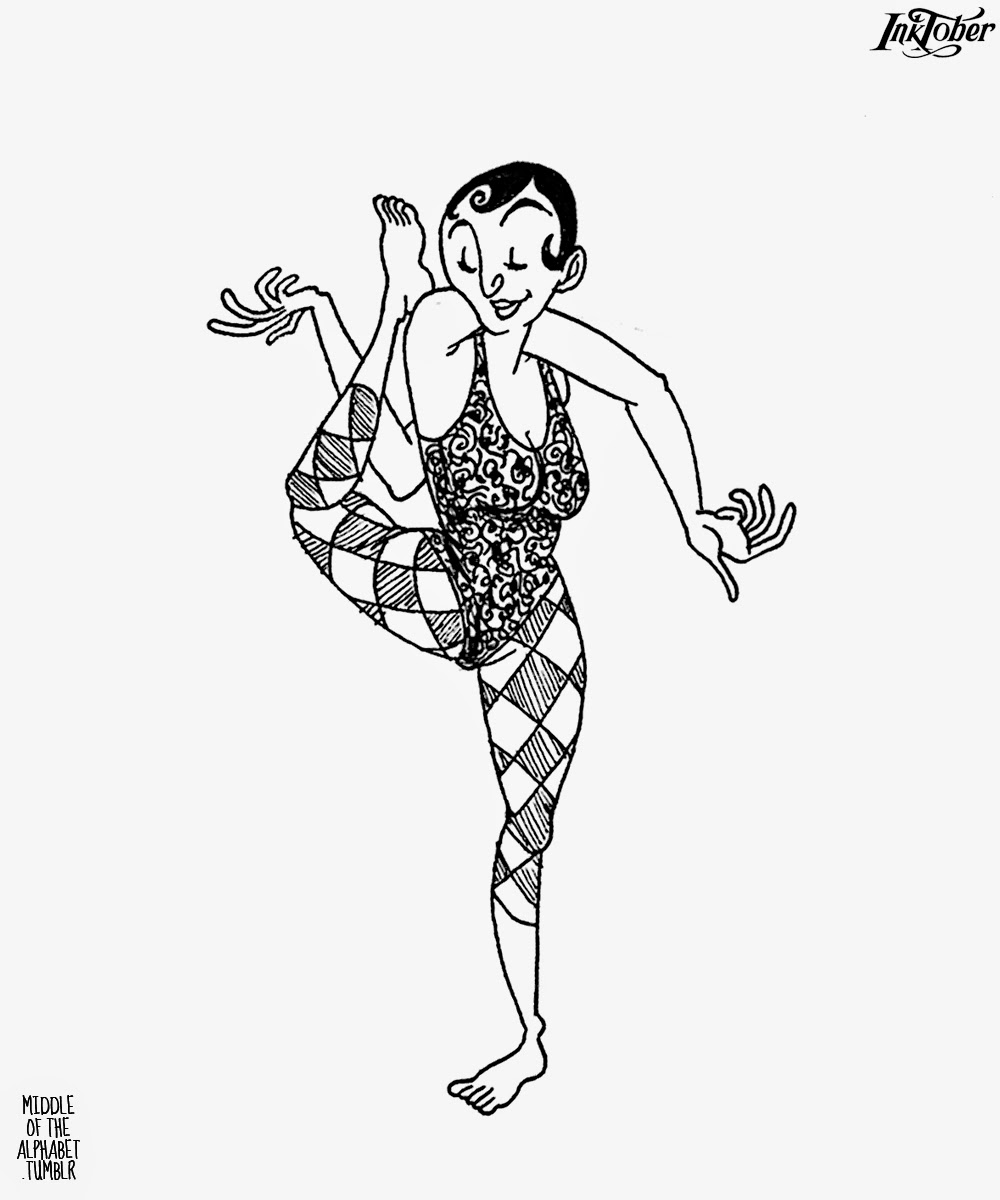 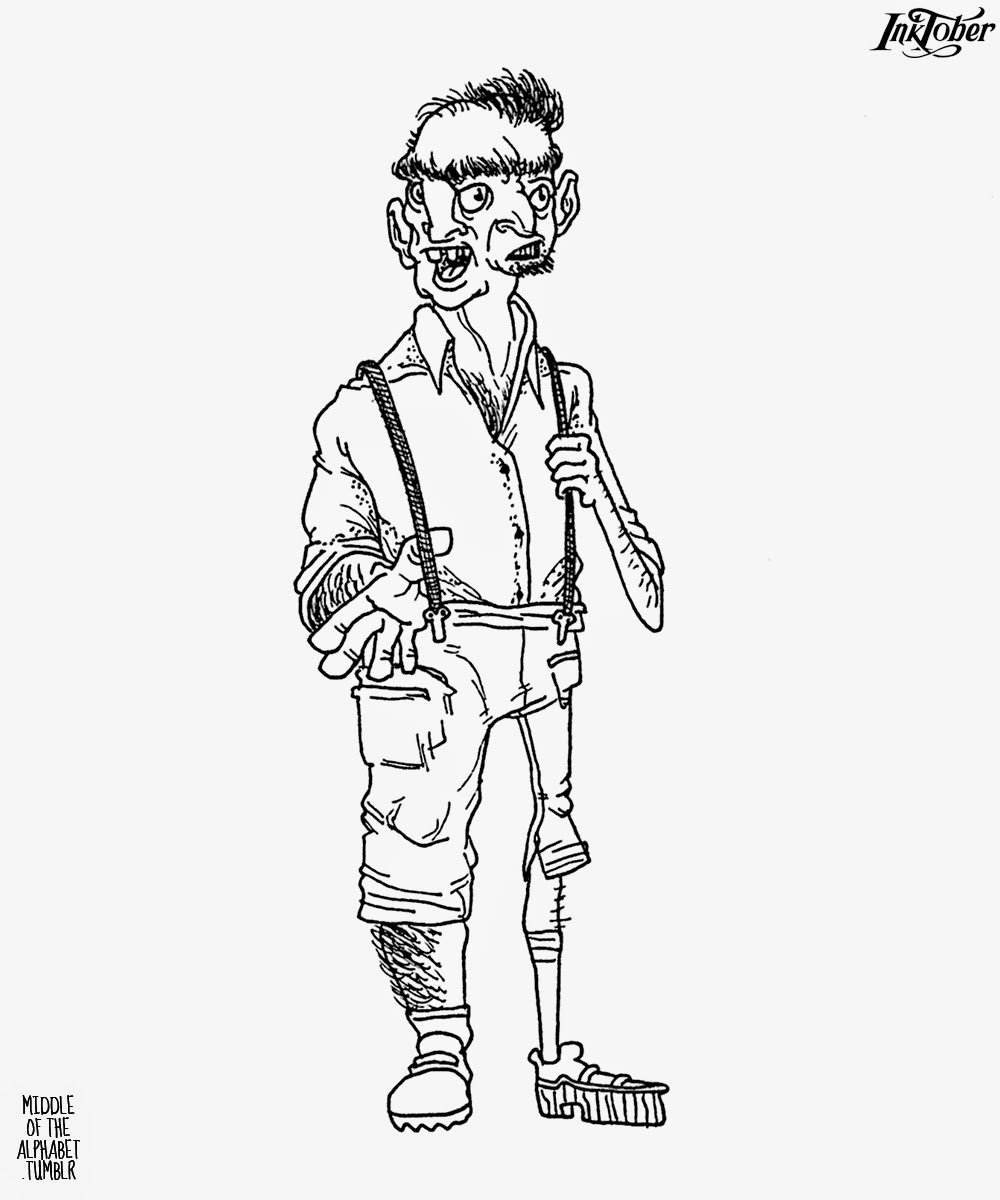 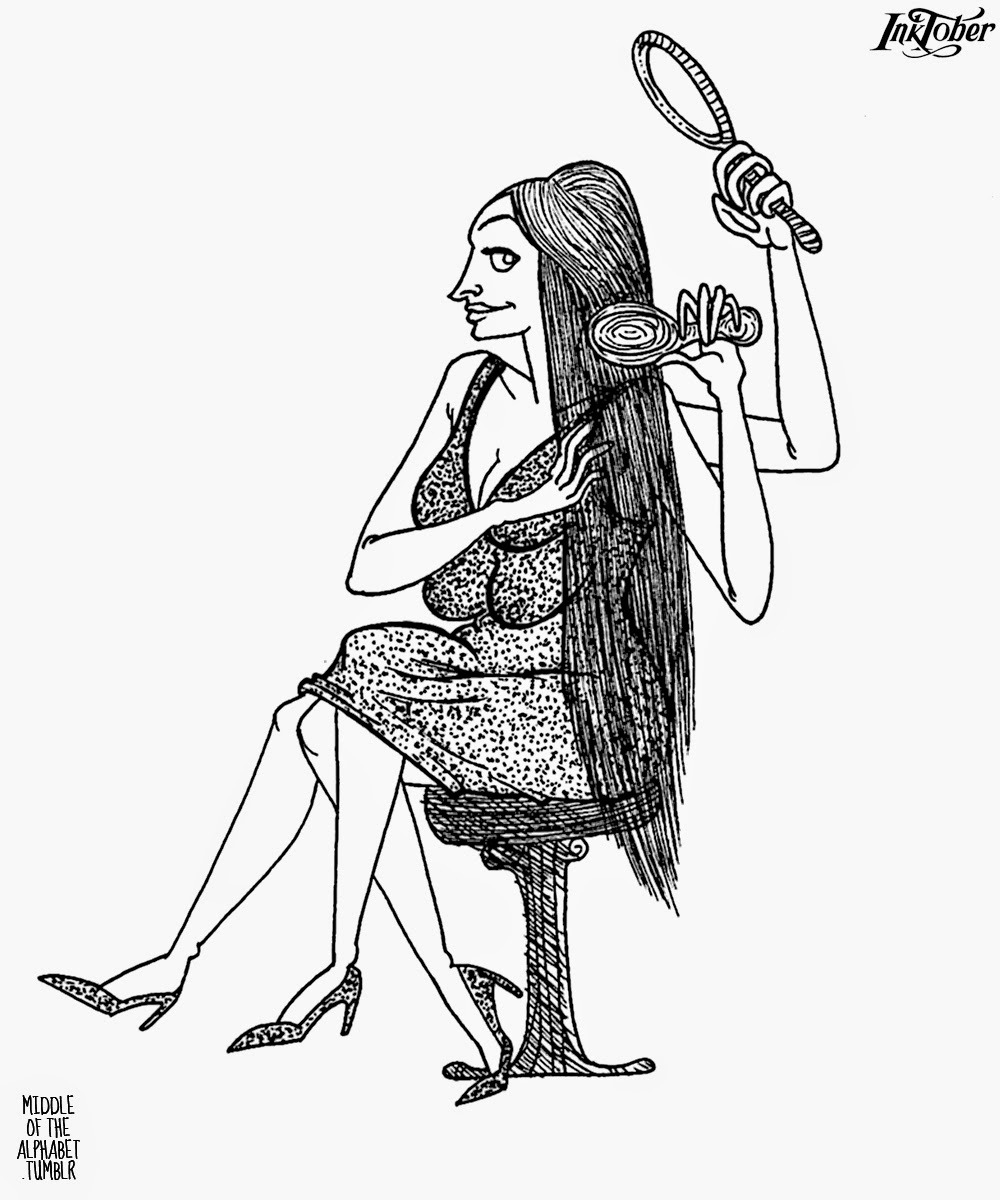 Time's been a thief again, and it's been another long stretch since I've posted anything on here. Let's hope that changes.
- J

Posted by Jeremy at 9:56 PM No comments: 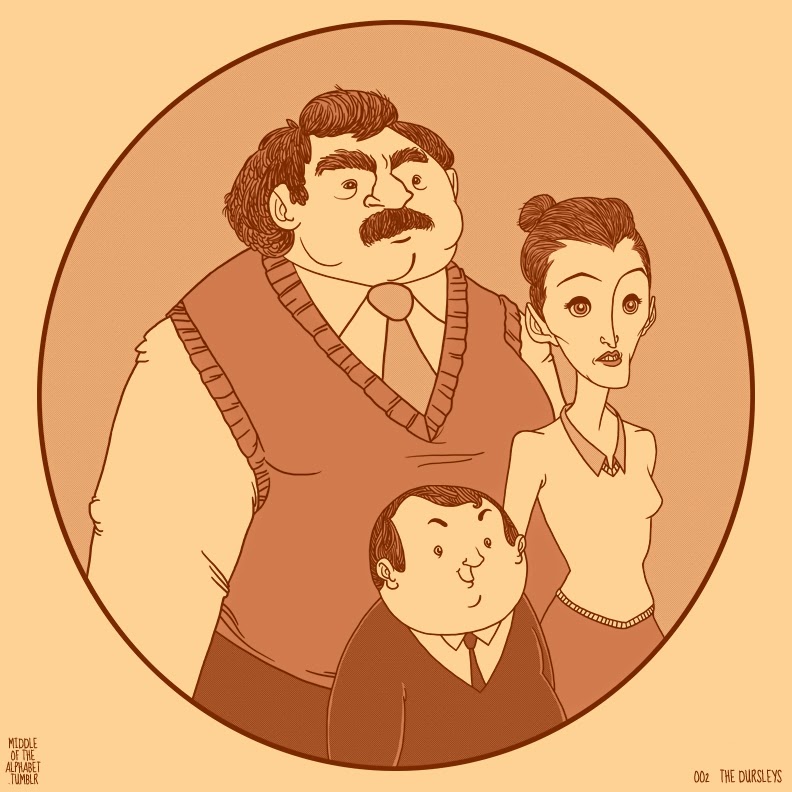 Posted by Jeremy at 9:53 PM No comments:

There's a tumblr that I stumbled upon last year through artists that I follow. It's called Wizarding Wednesdays, and it's blog devoted to Harry Potter fan art. The admin post a character from the series once a week, and the community, in turn, draws the character according to how they imagined them while reading the books. It's a fun exercise for me to keep current with my art, and I've done every single one up to the week of this post.
I've basically glommed-on to Tumblr, using it to find inspiration and post current art, but I'm going to try to do better about updating this blog as well. I know many of you that read this are my personal friends and family, and I want everyone that's interested in my work to be able to keep up with what I've been doing lately, however contrarily it may have appeared as of late.
This one, for those of you how can't immediately recognize the characters, is primarily of Rubeus Hagrid, the abundantly kind half-human/half giant gamekeeper at Hogwarts (with an eleven-year-old Harry thrown in for size comparison). 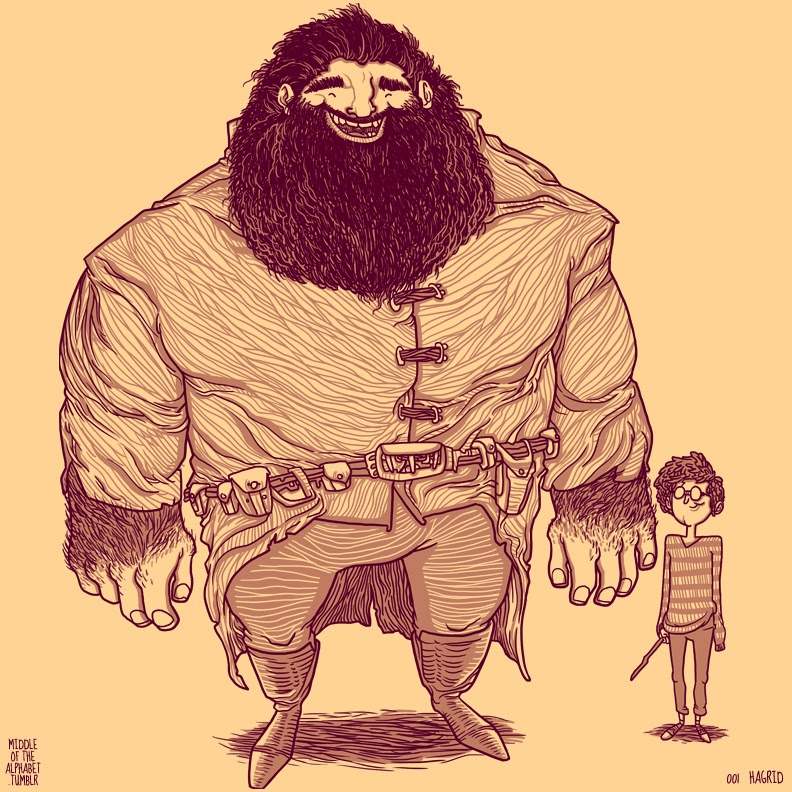 This Machine Surrounds Hate and Forces It to Surrender

In honor of Pete Seeger’s passing, I wanted to do a little tribute piece. Pete was one of the reasons I wanted to pick up the banjo, and his voice (both for environmental and philosophical understanding) has always been an inspiration. I’ll miss you, Pete. 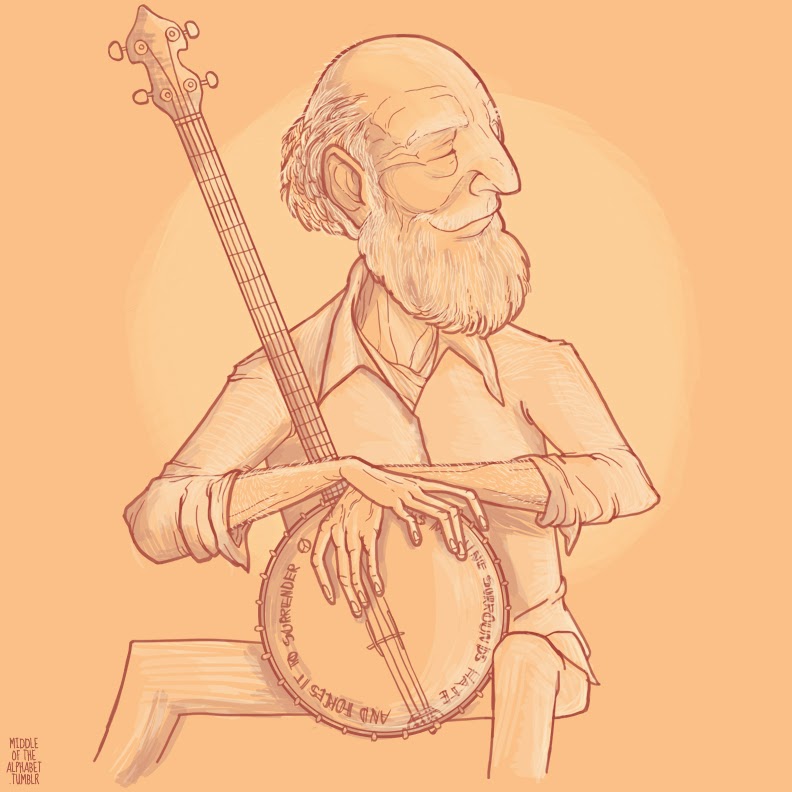 A Mother to Us All

This was my entry to Threadless' 'Next Big Tee' challenge, for which the prize was 10K. I didn't end up winning (and this didn't end up printing), but after it was all finished, I can honestly say I was very proud with the result.
In case you hadn't already guessed, this is a design showcasing Mother Nature, with all her seasons and splendor, elements and eloquence. If something of mine was going to print for the challenge, I wanted it to be something that I appreciate and fear; something that I care very much for and want to see flourish. 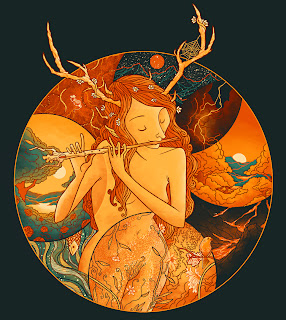 One year ago today I took my girlfriend to go see Beach House. We’re weren't officially together then, but that concert was one of the defining moments leading up to our relationship. Beach House is her favorite and is one of my favorites also. The show was incredible, and they even played her favorite song, Heart of Chambers.For a surprise Christmas present (which also included: an encouragement book found at Goodwill, a Threadless thermal, dvds for Black Swan and Eternal Sunshine of the Spotless Mind (some of her favorite films), a mix-tape, and, of course, detailed instructions on how to open the gift (which was wrapped in an enormous box), I made her this unofficial concert poster for the concert we went to. The logo is an homage to the font from Beach House’s first album cover (as I love the font so much).
I wanted this to be something that very few people knew about for a while (as it was intended mainly for her enjoyment), but, after a year, I figured it was time to share (though I did ask her first).Lastly, thank you Beach House for pumping out the quality jams that ultimately drew us closer together. We'll be at your next Seattle show. You can count on it.

Visitors to this Page